#1
Another blockchain game has arrived. It is CryptoCities.

CryptoCities developers have set an ambitious goal for themselves - to move the world to blockchain. To do this, they divided the entire planet's map into 1 million plots and called them "cities". Anyone can buy "land" in CryptoCities and become "landlord".

Each territory has its own characteristics, which determine its price. The better the stats are, the more expensive the plot is. In total, CryptoCities' plots has about 30 stats, some of which are unique to specific sites and are unique.

Territories bring passive income to their owners. How much money the city brings to its owner, you can see in its card ("Earning Gold" field): 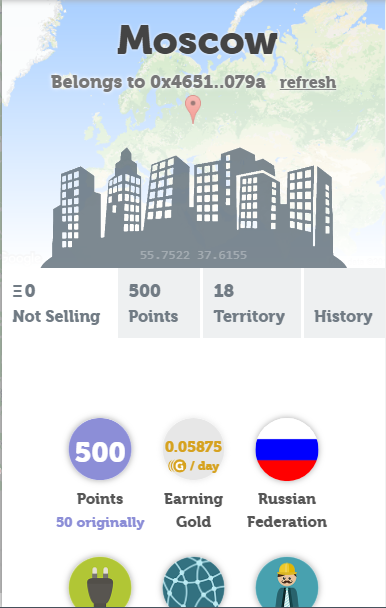 It is worth noting that the earnings are indicated not in ethers or in some other cryptocurrency, but in "gold". What is the "gold" rate and whether it is possible to withdraw money, while it is unclear. However, developers promise to add this opportunity (they said that they "want to earn money only if their players also receive income"), as well as to determine the exchange rate to ether.

By the way, if you scroll through the menu shown in the screenshot above, you can see the characteristics of the city. It is not clear yet how they affect the gameplay and whether it is possible to do anything in CryptoCities in addition to buying territories.

The transaction fee in CryptoCities is 3.9%. Developers believe that this is very little and try to point it out as their achievement. However, it is not: in many blockchain-games administration does not take more than 2-3% from its players.
However, the fee size is not so important: if it was the only drawback of CryptoCities, then you could ignore it. But this is not so: there are enough minuses.

And the main one is that CryptoCities is another game without an idea behind it. There is no special feature that would attract users. Instead, we are offered another collecting blockchain game, where everything that can be done is to buy up territories. And why this should be done is not clear: profit is gained in "gold" - an incomprehensible currency with a vague prospect. There is a great risk to tranfer ETH to developers and get nothing.

#2
Another Ponzi scheme? And quite frank one.

#3
The game looks nice. Perhaps, this is the only thing that can be called "good". But overall it is another gray project without real prospects.

#4
Why did they not spend a little more time and did not create a game where you could fight, conquer territories, buy them from each other - in short, a normal full-fledged strategy on the blockchain? This would be interesting for players. And no one will want to participate in what CryptoCities offers now.

#5
Plots that bring at least some profit, cost 5-10 ETH (and even more) already. It seems that all the "tasty" places were sold to someone by acquaintance ...

#6
Developers hope that someone will see the word "blockchain" and rush off to buy plots. But the audience is not the same: people realized that not everything "blockchain" is gold, and they choose games more carefully. And CryptoCities, of course, can not stand the competition.
You must log in or register to reply here.
Share: Facebook Twitter Google+ Reddit Pinterest Tumblr WhatsApp Email Link